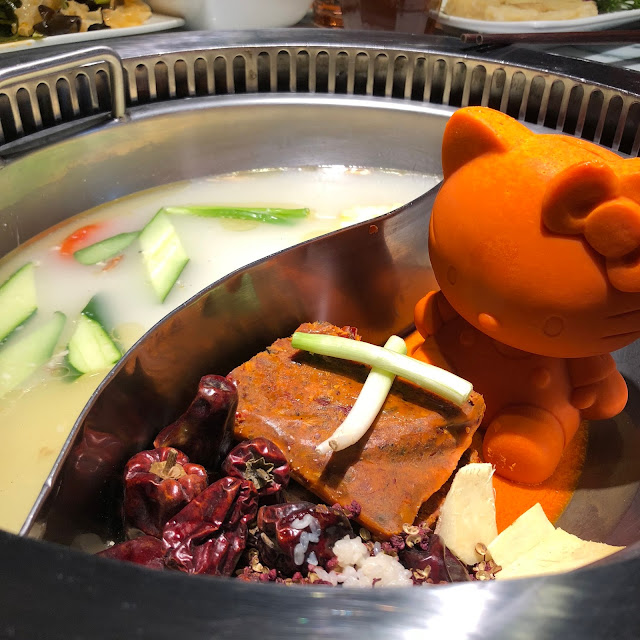 Hello Kitty shaped out of mala soup and beef oil

I was invited to the Grand Opening of Spice World, which is an award winning Chinese hot pot chain brand, in Singapore. Their latest branch is located in a 200-seater, 6,000 square foot dining space at Clarke Quay that serves up an array of aromatic spicy and non-spicy broths with high-quality and fresh ingredients. 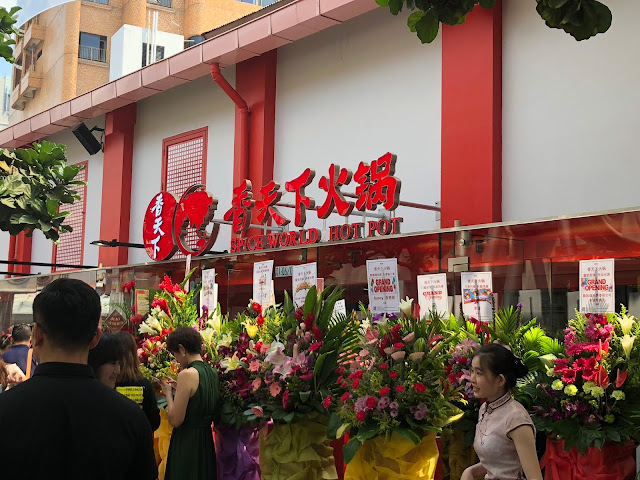 At the Grand Opening of Spice World Hot Pot Singapore

The restaurant interior design of Spice World is a fusion of old and new world charms. The front half of the restaurant is modern chic - featuring mirrors on the ceiling, black steel and clear red glass panelling while the inner sanctum is more traditional with its geometric lattice wood-clad pavilion. This was inspired by the view in Mount Qing, a UNESCO world heritage site in Sichuan province, known for its magnificent landscape and scenery. You know that Spice World spared no expenses as this architectural space was designed by world-renowned designer Shen Lei, built in China and re-assembled in Singapore. 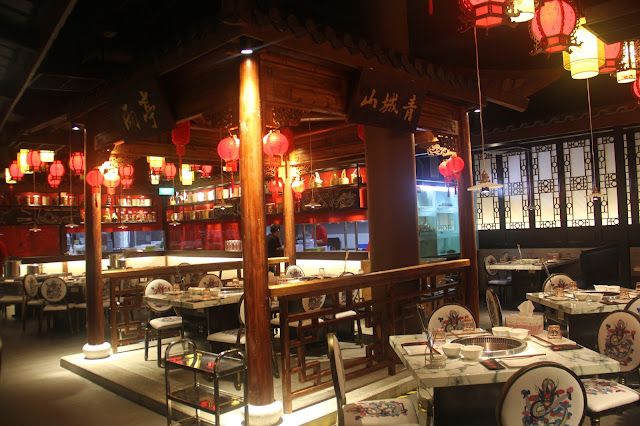 The interior of Spice World

Spice World Hot Pot was founded in 2003 and is one of China's top ten global hot pot brands that prides itself in the meticulous preparation of their soup broths and accompaniments. Their soups do not contain any artificial flavouring, MSG or flavour enhancers. Instead, the soup bases are first brewed in Sichuan, China using the most carefully sourced deep forest peppercorns from Hongya farmlands, chillies from the mountainous regions of Guizhou and Sichuan before being flown to Singapore, where it goes through a secondary prep. My favourite mala broth is brewed for at least four to six hours before serving.

You can choose from 7 different soup bases:

We chose the first and second broths and I must say that I loved both. The mala was especially fragrant while the pig stomach soup tasted a lot like what my mum boils at home too. Haha!

You can mix and match 2 different soup bases, otherwise known as Yin Yang at S$22.90++ or the Benz Triple Flavour Broth at S$25.90++. Solo diners can also choose a single serving at S$6++. The Teddy Bear or Hello Kitty are really quite fun and they're made out of mala soup and beef oil. You can slowly watch it melt into the broth for an additional S$9.90++ and do note that it's limited to 8 per day so you might want to call the restaurant in advance to book your Hello Kitty or Teddy Bear.

Watch the time-lapse of my Hello Kitty mala in the video below:

As seen from the video as well, they serve fresh Australian M8 Wagyu beef (S$38.90++) draped over a Barbie doll which honestly, is reminiscent of Lady Gaga but is slightly creepy in my opinion but it was definitely a source of entertainment for us at the table. For example, we joked about how we were eating her skirt first and then leaving the 'blouse' on till last as we didn't want to expose her boobs. Taste-wise, I didn't realise that it was wagyu (should've guessed from the marbling) and I felt that it tasted better cooked in the mala than in the pig stomach chicken broth. 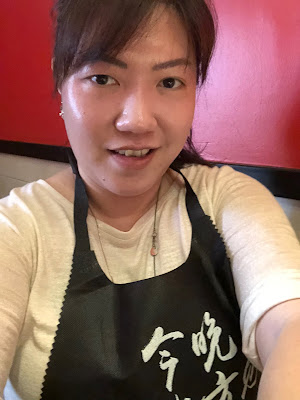 Speaking of blouses, I'm glad that Spice World provides cute little aprons for diners as eating hot pot tends to be a little messy due to unexpected splash backs as you put food in to cook or when the wait staff tops up the broths. 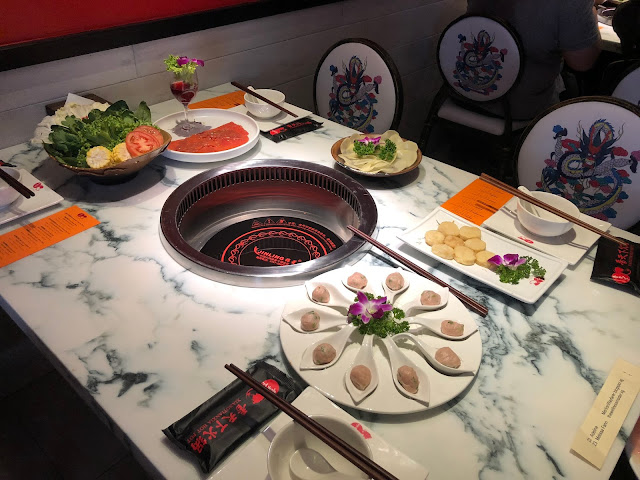 Those small little spoonful of balls are the cheekily named Prime Minister's Pork Balls (S$12.90++) as it's the former UK Prime Minister David Cameron's favourite dish, and they're pretty tasty although I wasn't a fan of the coriander inside. 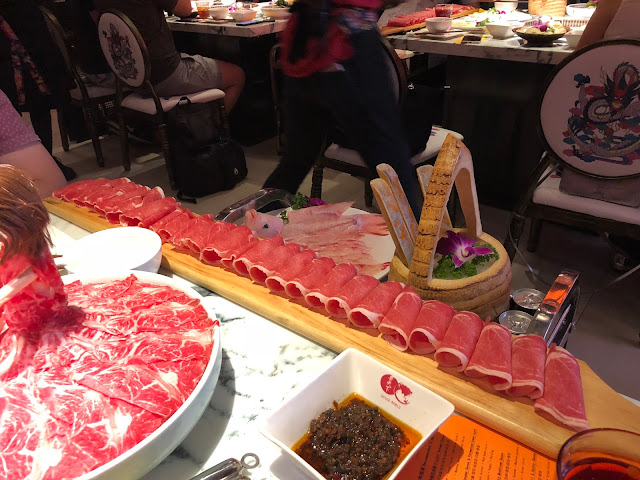 There was Aussie mutton (S$28.90++) served on a metre-long plank and I'll be honest...I couldn't taste the difference between the lamb and the beef. 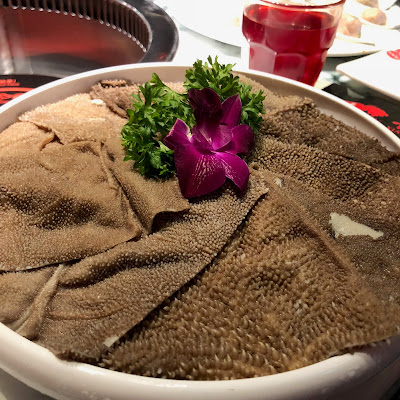 I liked their beef tripe (S$15.90++) which is from the first section of the cow's stomach and like all the meats, are flown fresh to Singapore. 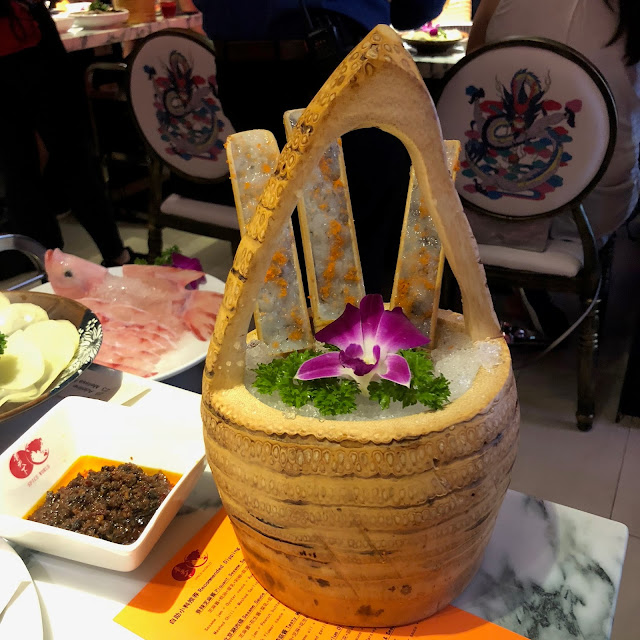 Seafood lovers would like the freshly prepared shrimp paste (S$18.90++) which is made from 100% shrimp meat and tobiko. I liked how the servers will help you drop and cook the paste in the soups so that you need not fuss with them personally. They also have a seafood platter at S$59.90 but we had a serving of fresh fish that was sliced very thinly. 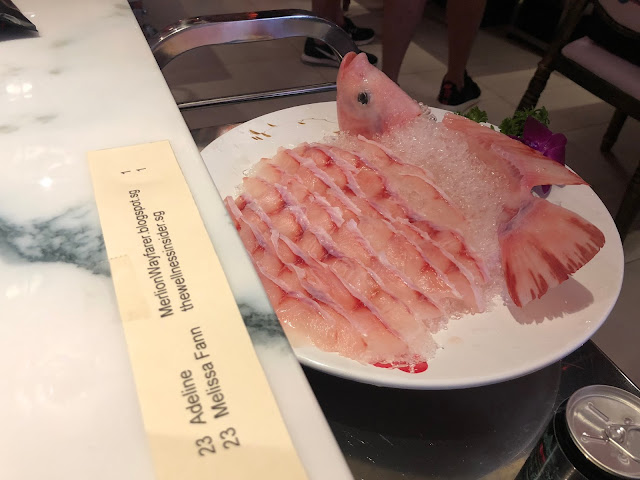 Besides the freshness of the ingredients, I was impressed with how Spice World has a policy of hand-slicing all of their food! And their food is flown to Singapore fresh, not frozen. 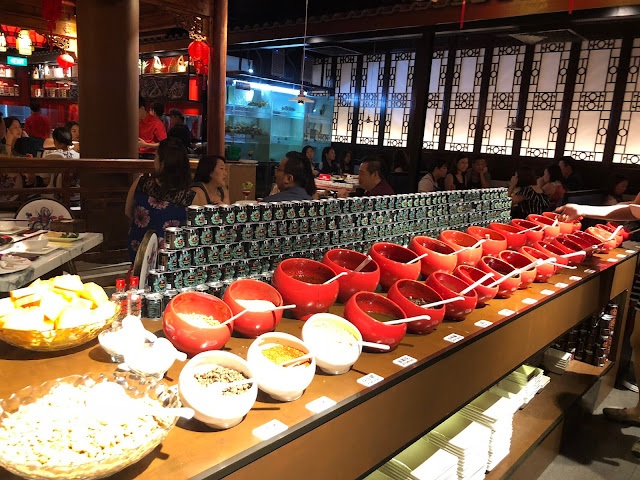 Another impressive thing is Spice World's selection of sauces. You're really going to be spoilt for choice and they even provide a small piece of paper with some suggested mixes. 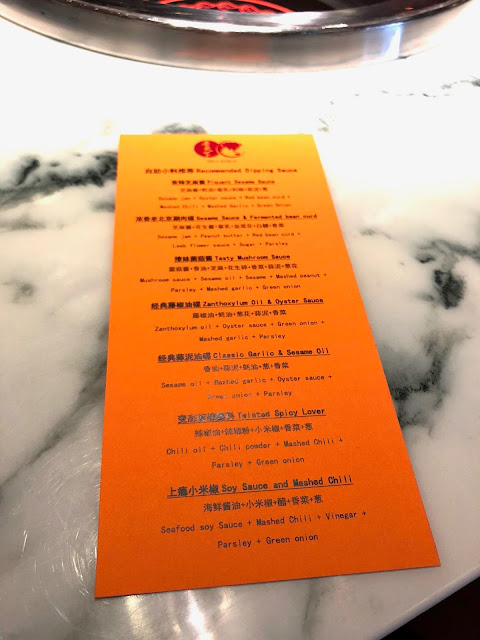 I decided to try their first suggestion of oyster sauce, sesame paste, fermented bean curd, chilli, garlic but I left out the green onions (how typical of me). 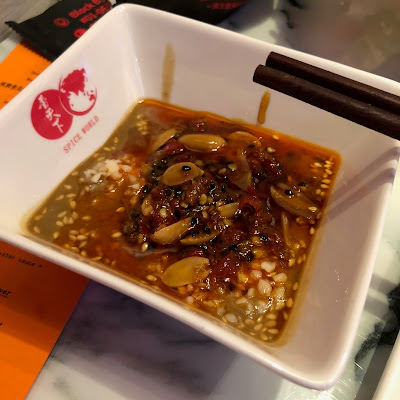 My mish-mash of a sauce was a tad salty thanks to both the oyster sauce and fermented bean curd so I decided to mellow it down and add in a bit of fragrance with their Zanthoxylum Oil. 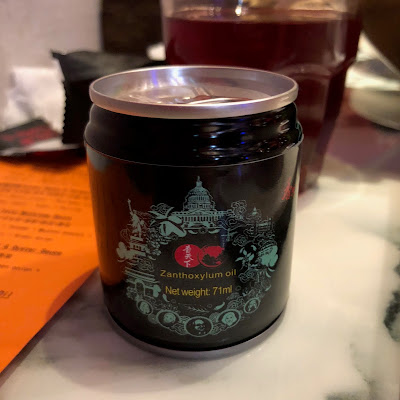 Wuttt oil? LOL. That was my initial reaction too. This oil is actually the oil from the Sichuan pepper and adds to the numbness that is characteristic of mala. However, in small doses, it is a bit more like sesame oil - fragrant.

Dessert was a disappointing bowl of jelly, raisins, watermelon bits and crushed peanuts. I was hoping for sorbet or ice cream that would really help to wash away the spice. However, that was the only down note.

The soups were really flavourful and as there was no MSG, you will not feel exceptionally thirsty after the meal. I think a lot of late-night revellers in Clarke Quay would happily tuck into the hot pot meal after clubbing and yes...another place to makan after 10pm!!

They're having a Mother's Day promotion from 12th to 14th May 2018 where there will be complimentary rose jelly dessert for all ladies and free soup broths for anyone bringing their mothers to dine at Spice World. 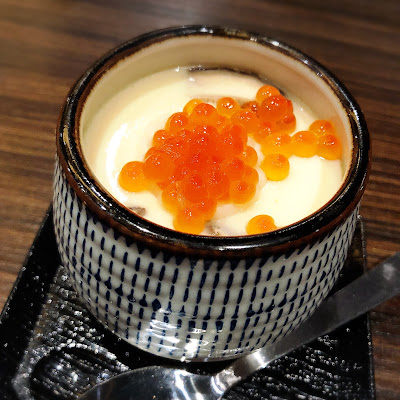 Some friends and I decided to make a day trip to Johor Bahru (JB) just to spend the afternoon and evening there. Like most typical Singaporeans, we go there for cheap and good food as well as services such as massage and even to do our nails!

But since this is my food blog, let's talk about food. We went to Kinsahi Japanese Restaurant at KSL City, which is supposedly a premium restaurant in JB. The decor and ambience of the place is certainly quite nice and plush, with an artificial 'river' in the middle of the restaurant. I don't suggesting sitting too close to the river as the splashback feels like someone randomly spitting at you.

Chawanmushi with salmon roe
Agedashi tofu
The chawanmushi was ok. You can't really go quite wrong with this. The agedashi tofu wasn't great. I had an issue with the tofu used as it had a slight sour aftertaste while one of my friends felt that it wasn't crispy enough. I do know that it's tough to make this … 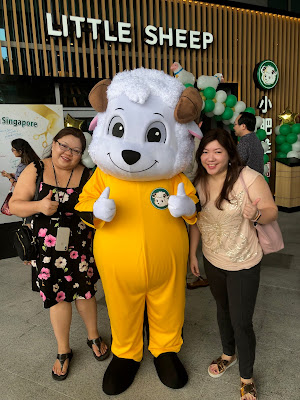 Little Sheep Hotpot from Inner Mongolia is now in Singapore thanks to No Signboard Holdings and I was kindly invited to their official opening! Located at One Fullerton, Little Sheep Hotpot Singapore does have a nice view of the bay area (if you're seated next to the glass windows) and will attract quite a lot of tourist traffic.

No Signboard intends to open one outlet per year over the next five years and Little Sheep will add diversity to the group's restaurant business, which is already known for fresh seafood.


The soups Established since 1999, Little Sheep Hotpot is famous for their lamb delicacies and their original soup base (S$9++ for small, S$20++ for large) is apparently made from 36 different spices and herbs such as goji berries (aka wolfberries), jujubes, black cardamon pods and ginseng. Needless to say, there is also the spicy mala option (S$9++ for small, S$20++ for large) that's cooked with chilli and Szechuan peppercorns. You can choose to have two soups i… 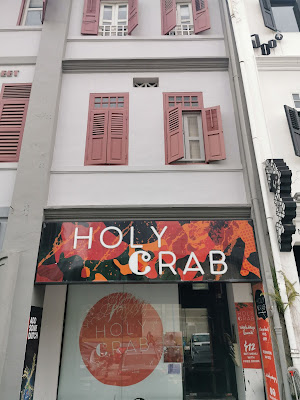 Review - In a Crabby Mood

Eating crab is often a messy affair and requires a lot of effort to crack open for just a little morsel of gastronomical gratification. As such, whenever I choose to order crab, the taste had better be worth my energy to peel and devour it. Over the past few decades, I have repeatedly tried several crab dishes at various famous local seafood restaurant establishments such as Melben Seafood, Jumbo Seafood, Long Beach Seafood, as well as Palm Beach Seafood, which is widely credited for originating and inventing the chilli crab dish.

However, the standards at most of these establishments are inconsistent at best and have unfortunately been steadily declining over the years. The probable causes for the notable drop in standards are that these famous eateries have been resting on their laurels and riding off their historical reputations. This makes room for a new kid on the block to knock my socks off.


After 7 years of being a private dining chef, dapperly dressed Elton Seah opened up Hol…